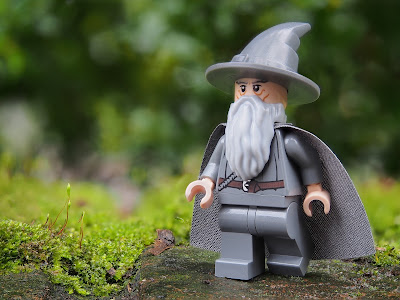 For some reason, I've been thinking about Tolkien RPGs recently (I think, stemming back to that mysterious map from the Amazon LOTR show that got posted, and the slight uptick in online LOTR discussion which followed).

Playing in Middle-Earth, like any setting tied to an overwhelming literary / film / ludo canon, presents the question: what do you do about all the famous stuff? This isn't as much of an issue with some media settings, say, Star Wars, which is already an expansive enough universe to support a bunch of different storylines. But it pops up with other settings, like Tolkien, especially as it is my fervent belief that you should generally play as hobbits in any Middle-Earth campaign, and the canonical record on adventuring hobbits is very sparse. (Of course, it is fully possible to play many adventures without caring about this at all, but that is not the subject of this post.)

One solution is: rather than playing around canon, play within canon. Years ago, former Wizards of the Coast producer Greg Bilsland had a few blogs about playing through the original Dragonlance module (which had been his childhood fantasy keystone) with his group, and the great fun they had. (Of course, the history of Dragonlance is that the books were kind of novelizations of the authors' home D&D campaign.)

A few years ago, inspired by this, I tried my own take on it: I ran a D&D campaign based on the plot of my own childhood fantasy keystone, Baldur's Gate, with original PCs. It was semi-successful, probably due to the fact that only one player had played Baldur's Gate, and that the story didn't work as well without all the Candlekeep and Bhaalspawn stuff.

But that wasn't my first experience with playing through established storylines. In the year 2000, when I, an old person, starting playing RPGs seriously, my friends and I didn't start with Dungeons & Dragons. We had D&D 3.0, but for some reason, our favorite game was actually Wheel of Time (I don't remember where it came from, but freshman year, the Wheel of Time saga was hot shit). And being teens muddling our way through RPGs, without the entire current internet there to teach us how to play, we mostly repeated a few stock scenarios over and over.

One scenario was that our adventurers entered the town of Whitebridge (why? I have no idea. It was on the map) and proceeded to fuck it up. The opening scene was always that we were meeting with the Mayor of Whitebridge and then attempted various coups and seizures of the throne until we were killed by an armed response from the Whitebridge police. Once slain, we would create new characters and then set them upon the same usurpious path.

A better scenario was: we played the opening chapter of The Eye of the World over and over. In this chapter, farmboy Rand al'Thor and his friends live in a quiet village which is suddenly attacked by monsters. After stopping the monsters, they abandon their village and embark on an epic quest across the wider world.

We played this scenario many times, not as Rand and his pals, but as original characters. Would we save the village? Would our characters' parents be killed by trollocs? Would we manifest strange magical powers? Etc. But for whatever reason, we never used this as a springboard into an actual campaign, like its literary inspiration. We just liked that scenario. Why? Who knows. We were fourteen. (As far as I remember, the first real campaign was when I GMed a long-running d20 Call of Cthulhu game, starting my journey into Earth-set RPGs. Yes, I know, the d20 era was truly a grand time to be a child.)

Circling back to JRR, it would be kind of fun to do a game where it's the Scouring of the Shire, but your hobbits save the day. Or you could go fully mad and just play the whole fucking saga with your own hobbits. What sort of bullshit would happen if your OC went on the Quest of the Ring? Of course, these are fun topics for an old man to idly consider while avoiding paid labor, but unlikely to ever pass.
on March 04, 2019